Differential analysis within species based on unique gene sequences

Pan-genome refers to a collection of genes for all strains within a species. Distinct from using individual genome as representative genome of a species, pan-genome enables a more comprehensive presentation of all genetic information of a species, which largely supports the research in sub-species and variants with very distinct features. Accumulated evidence has shown that differences in unique fragments between sub-species are more likely to be related to key features than that in common fragments. Pan-genome sequencing empowers the analysis on both core genome and accessory genome and unique sequences based differential analysis within species.

Massive experience in thousand species genome construction has been accumulated over past 11 years.

Biomarker Technologies is equipped with the latest third-generation sequencing platforms, including all types of PacBio platforms and Nanopore platforms.

Biomarker Technologies is an expert in QTL mapping.

We own over 30 self-developed patents and 150 software copy rights.

Cotton represents the largest source of natural textile fibers in the world. Over 90% of annual fiber production comes from allotetraploid cotton (G. hirsutum and G. barbadense). G. hirsutum is cultivated all over the world because of its high yield and G. barbadense is prized for its superior fiber quality. To cultivate G. hirsutum that produces longer, finer and stronger fibers, one approach is to introduce the superior fiber traits from G. barbadense into G. hirsutum. A genomics-enabled breeding strategy requires a detailed and robust understanding of genomic organization. 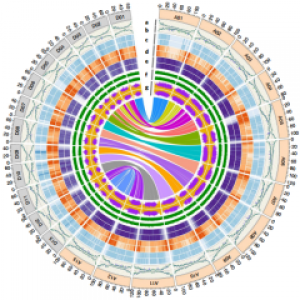 Figure 1. Chromosomal features of G. hirsutum and G. barbadense genomes with integration of genetics and epigenetics data
3. Introgression line population construction and QTL mapping In order to introduce favorable variants that control the formation of important agronomic trait, such as fiber quality, from G.barbadense to G.hirsutum, introgression line population was constructed. 168 introgression lines determined by molecular markers were sequenced an 466 introgression segments covered 26 chromosomes were identified (Fig. 2). The genetic variant underlying the fuzz-less mutant in G. hirsutum were found to be co-localized with the quantitative trait locus (QTL) in G. barbadense. Characterization of this introgression segment, together with natural fiber mutants, will facilitate a comparative analysis of the mechanism of fuzz fiber initiation between G. barbadense and G. hirsutum. 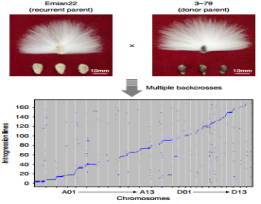 By assembly of reference genomes for two cultivated cotton accessions, we have been able to identify extensive variations. These variations should be integrated with those from genome analyses of other accessions to fully exploit genome divergence between the two species in the future. We explored beneficial genome sequences underlying superior fiber quality between two representative accessions of species by constructing introgression lines that can be used for the cultivation of desirable traits in intensive cotton breeding.
Contact Us